What is Traditional Scottish Storytelling and the Cèilidh?

Storytelling is an ancient art form (one of the "High Arts" formerly). It's important to realise the difference between oral storytelling and other forms of delivering narrative such as book and film: the storyeller commits all Tales to memory, in very exacting ways, yet with much room for extemporisation during delivery.

In keeping with other forms of storytelling (film, theatre etc.) the listeners are important for the engagement they bring to the live performance, indeed, the audience frequently shapes the direction of a teller's performance by the questions, reactions and opinions they contribute. 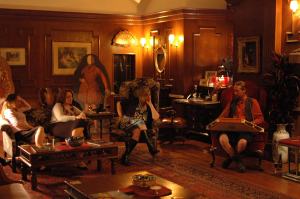 A Ceilidh at Castle Stuart

Storytelling has a multifacted history of use, playing its part in education of both children and adults, history keeping, law making, conflict resolution, propaganda, community decision making, community cohesion, personal counselling and entertainment. Many of these uses are still applied by tellers today.

As such, storytellers were (up until the last 300 years) members of the elite class in many cultures including Celtic, where Brehons / Bards / Seanachaidhean / Storytellers were valuable advisors to the Clan Chiefs and leaders. The Scottish tradtition comes from our Irish ancestry. Tales and the culture were brought over in around 500AD with the Irish invasion. There is something common to the style of storytelling from all of the Celtic nations.

Globally, storytellers were (and in some cultures still are) members of the healing arts. A certain style of Tale was told, one on one, as teaching aids or to encourage thoughtful change in the 'patient'. As such, storytellers were often the local shaman or village elder. Today, some storytellers work alongside health professionals. Jung and Adler would recognise the characters in these Tales as archetypes.

The old people had a way of coming together in the Celtic Lands - The Cèilidh (pron: "Kay-lee"). The Gàidhlig word means "a gathering of the people". They would collect, young and old, around the hearth of one of the villagers, or perhaps the hearth of a Chieftain's House. There would be songs sung and music to dance to. The oldest, or the Seanachaidh (storyteller) if present, would tell the Tales they had learned from their elders - Tales of their people, Tales of honour, of battles, of magic, of love, of sorrow. The Cèilidh and these Tales, older than the languages which now recall them, weave the people together, give the people a sense of who they are and where they come from.

There are many ways to come
to an understanding of ourselves.
The Tales are just one.
A powerful one.