COVID-19 statement: We are taking bookings for 2022. Your tour deposit / balance is safe and fully refundable should the tour be prevented under covid travel restrictions. Tell me more. 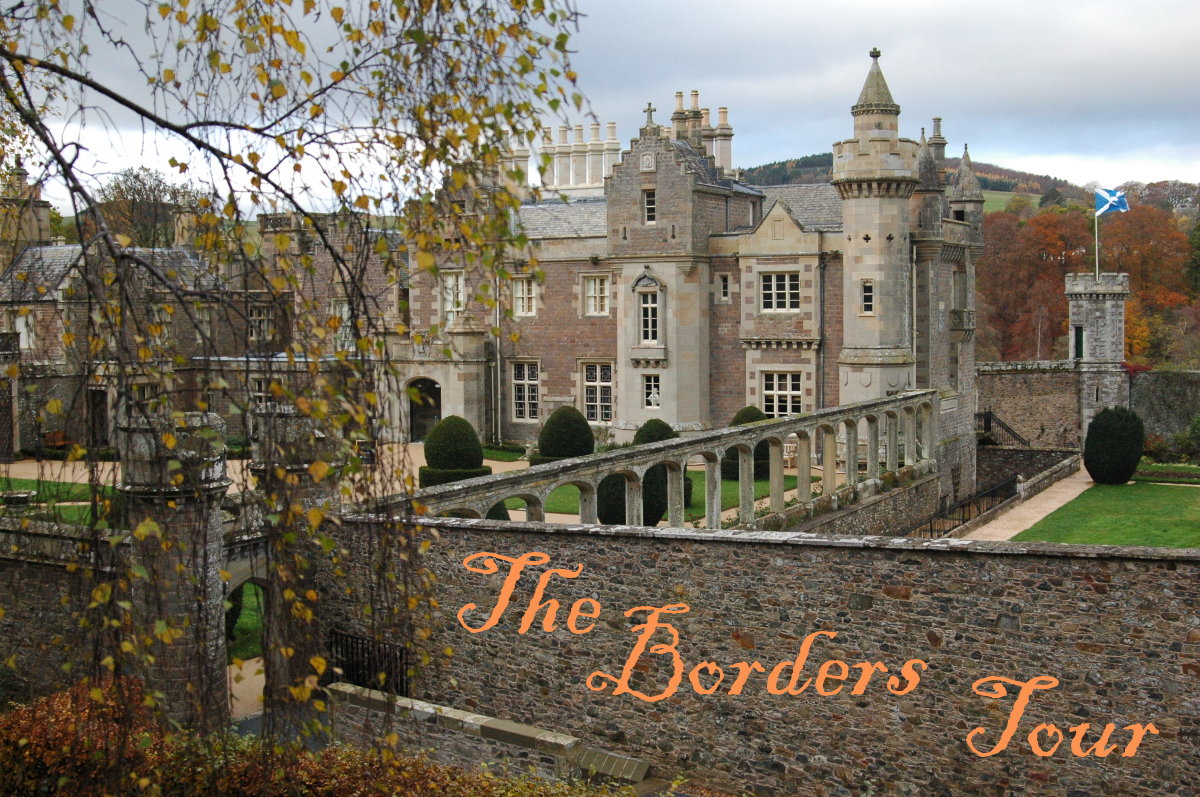 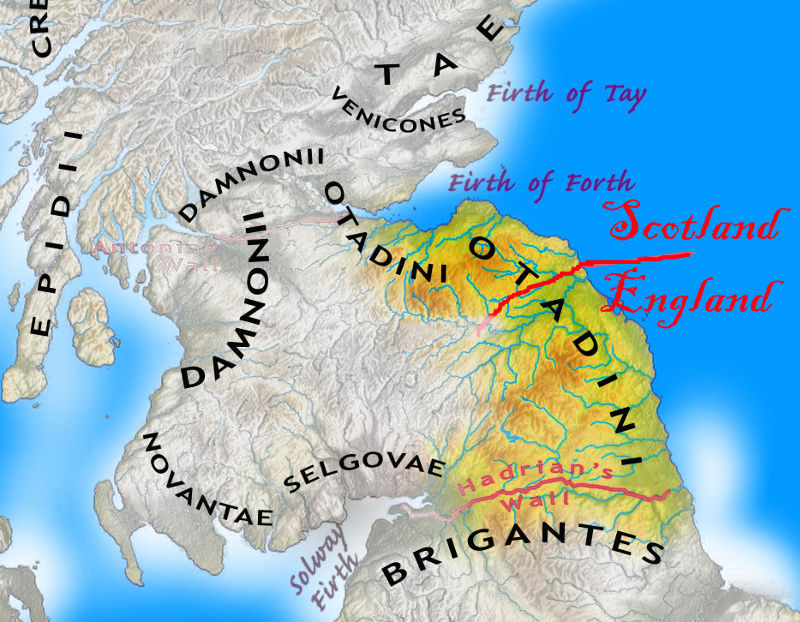 Where are the Borders?

The Scottish-English border is a region in itself. It is neither England nor Scotland, but a culture of its own (ask any Borderer). The modern borderline is arbitrary, having moved north and south many times in the last 800 years and included "disputed lands" at many periods of history. Our Borders Tour encompases the Scottish and English "East Marches" from the Lammermuir Hills just south of Edinburgh, through the Cheviot Hills to Hadrian's Wall in Northumberland (where the Romans sited the border 1900 years ago). The Roman map to the left shows the area covered - the former land of the ancient Otadini Celtic tribe. 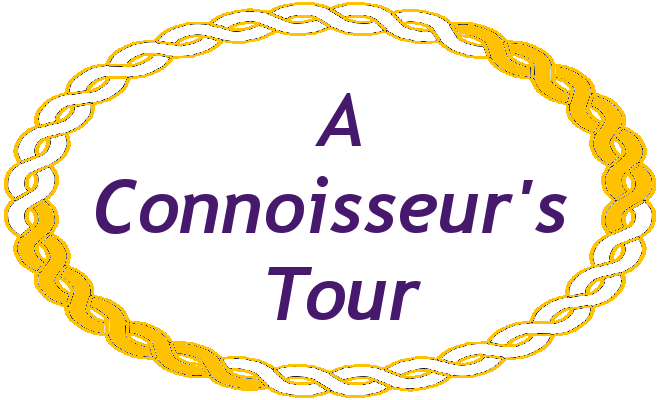 There is a huge density of interest in this small region, from history to scenery, to literature, to ancient sites, to castles... yet it is undervisited by tourists, or to be more accurate, it is visited by a small number of British travelers, and they're keeping it to themselves! The tag line for this tour could be "great places that you've never heard of."

Another reason to tour the Borders with us is that we're telling you it's worth it! Almost all our guests on this tour have toured with us before and know our style. They trust us to pick great things to do and if we say that this region is our favourite, they know they'll enjoy it too. This is why we call this "a connoisseur's tour": One for the second-time-around visitor or those seeking the road less traveled.

The flavours of the tour... 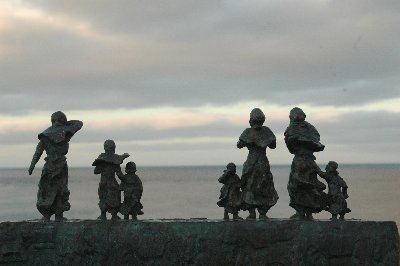 Sculpture to remember the fishermen 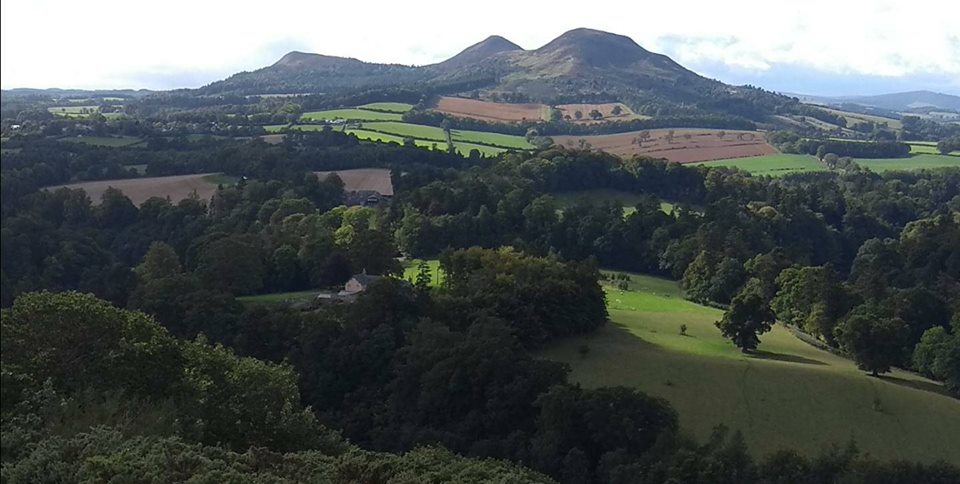 The overall feeling of this tour is one of undiscovered tranquillity, rolling green hills and imposing seascapes. Think oddities, quirks, things to furrow your brow; Think a century behind the present; Think border ballads, folklore and literature; Think hunting dogs and medieval castles.

Perhaps the Borders has an air of terra incognita about it from its time as a remote and hotly contested, ever-changing boundary between Scotland and England.

There are some videos at the page foot to give you even more of a flavour of the tour.

How do we explore this region?

We move south to north through the old Otadini Celtic tribe's territory, starting around Hadrian's Wall in modern Northumberland, England and ending in Peebles in modern Scottish Borders. It's not a large area, so we can spend less time in the vehicle and more time exploring on foot the towns, the cliff tops, the ruined abbeys, the riverbanks and remote Cheviot valleys.

We make a couple of hikes of around 3-5 miles (see Activity note). There is a strong literary theme to this tour, picking up on local authors, visiting the "Harry Potter Castle" as used in the film adaptation, sharing readings from local books. We stay with and meet Borderers. We might stay in a 700 year old castle too.

New for the 2022 tour, we will be hiking in a remote high area of the Cheviot hills where even archaeologists admit that the legacy of Celtic, Roman and Dark Ages history is under-explored. Every time we host the tour it changes: there is no "Best of the Borders" as there is far too much to to fill a week and we, your guides, are exploring the region for ourselves on each tour.

AD152 the year this wall was started 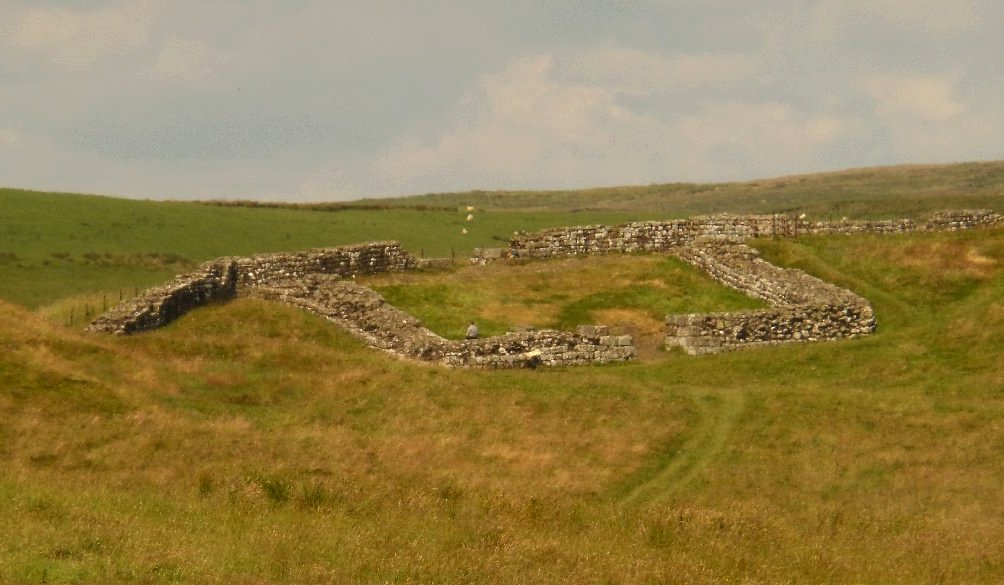 We head south from Edinburgh and the land begins to roll in green hills and deeply wooded cuts of rivers. We'll spend a couple of days based near Hadrian's Wall, built almost two thousand years ago and still in use. We'll investigate the Roman history of this region. A hike along the Roman ruins might leave you feeling strangely displaced amidst the rolling hills of an English moor.
While in the area, we'll dip back into literature with a visit to the scene of Diana Gabaldon's Outlander opus. We'll visit the site of Jerry MacKenzie's downed Spirtfire at a Milecastle.

This area is also known for playing a major part in the Industrial Revolution on the 19th century, so we will spend a day experiencing that through a fascinating living history town. 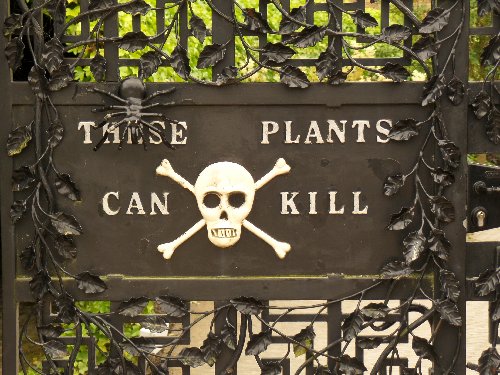 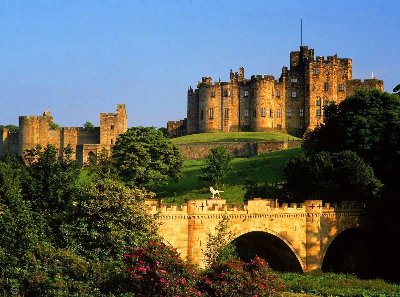 Alnwick Castle, so much more than Harry Potter!

We'll site ourselves near the ancient market town of Alnwick to look into the medieval history. We'll visit Alnwick Castle, famous for Harry Hotspur long before Harry Potter flew his broomstick there. We'll explore the beautiful castle gardens and be guided through the poison garden, a worthwhile, intriguing and sometimes humourous visit. Alnwick also boasts Barter Books, the book emporium that rediscovered the WWII propaganda poster "Keep Calm and Carry On". We'll make a special visit to this book seller to each buy a copy of any book that takes our fancy for quoting along the way. We did mention the literary theme, aye? There's enough around Alnwick to keep us going for a couple of days. Prepare for the best seafood you may ever have eaten! Check out this page's video for that. 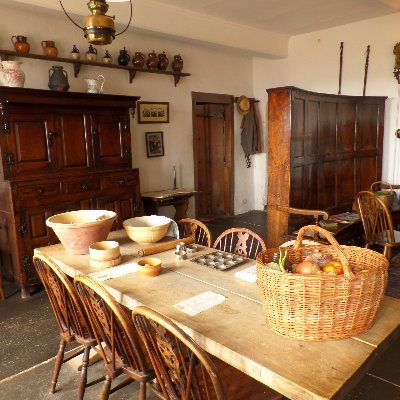 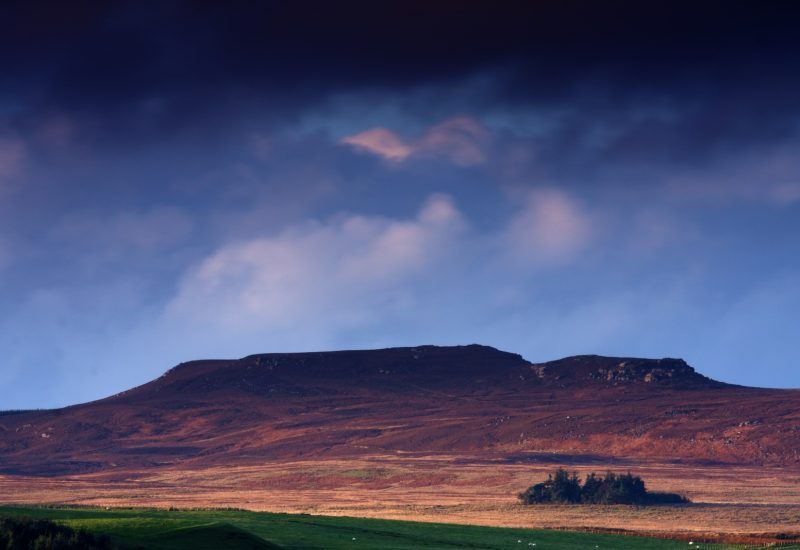 The once sacred centre of the Upper Coquet Valley - Simonside. Image from Northumberland National Park.

New for 2022: I was so taken with this remote, high moorland area around the hill Simonside when I learned that people have been living here, on the high plateaus and lost valleys of Northumberland for thousands of years, that I couldn't wait to lead a hike into the Romano British and Celtic forts and the neolithic complexes of burial cairns. We'll spend a day going into some of the remotest parts of the UK.

Visit to Holy Island (Lindisfarne) and its castle that sit dramatically above the ocean on the North Sea facing Norway - the cutest, cosiest castle you'll ever visit. 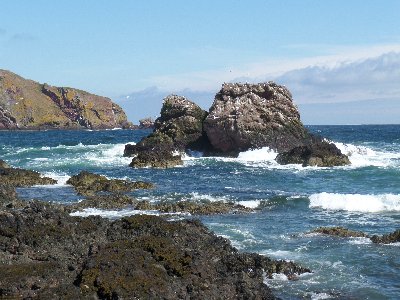 Sculpture to the lost fishermen of 1881

Moving further north and into modern Scotland, we'll visit a broch (a two thousand year old tower) set within an Iron Age fort. Returning to the North Sea coast, we'll see and hear seabird colonies nesting on the cliffs and we will visit an old fishing village of the Scottish and English fleets, an important part of the heritage of the east coast. The cliff-walk is spectacular.

You'll end the day in a vibrant Scottish market town famous for sheep, cattle and cloth. It also has a real-ale serving micro-pub, which we might fill up just by walking in the door! 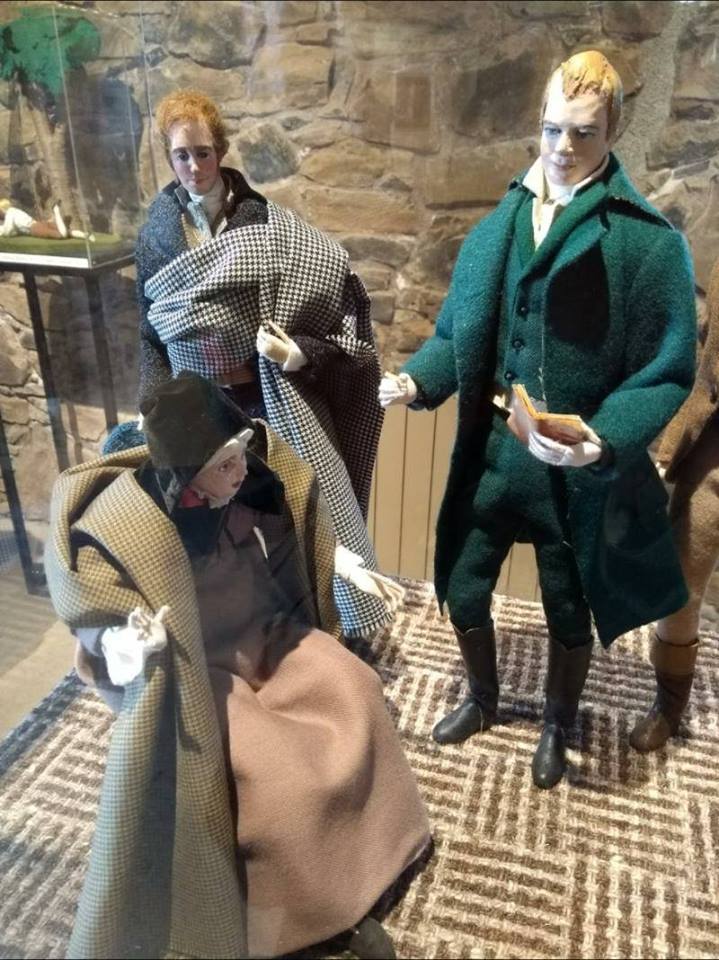 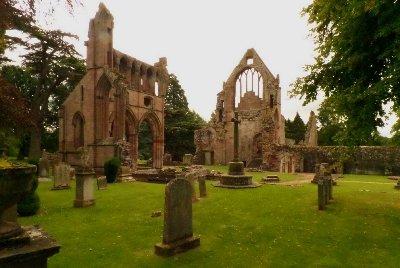 More French-style abbeys than you can imagine

We'll visit the opulent home of the 19th century's most acclaimed Scottish author, Sir Walter Scott, the writer responsible for inspiring Queen Victoria to travel to Scotland.
Our first walk of the trip will be gentle as we make our way to the River Tweed connected to the romantic ruin of Dryburgh Abbey where we'll continue our walk to explore its grounds beautifully tucked into the wooded glen. Our accommodation will be in a B&B chosen for local hospitality.

Picking up on the literary theme again, a visit to Peebles and the home of author John Buchan, of The 39 Steps will take you to a time when a main street had family run busniesses. A walk along the river is sure to spot herons and swans.

Reluctantly we'll head back to the bustle of Edinburgh by around 5pm on the last day.

Note: We may rearrange the order of the itinerary out of necessity or to take advantage of the special events yet to be announced. 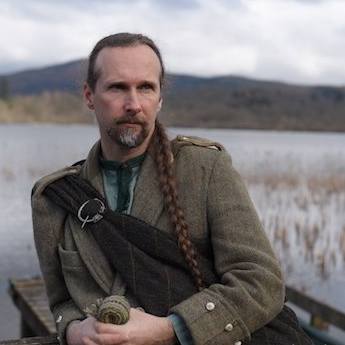 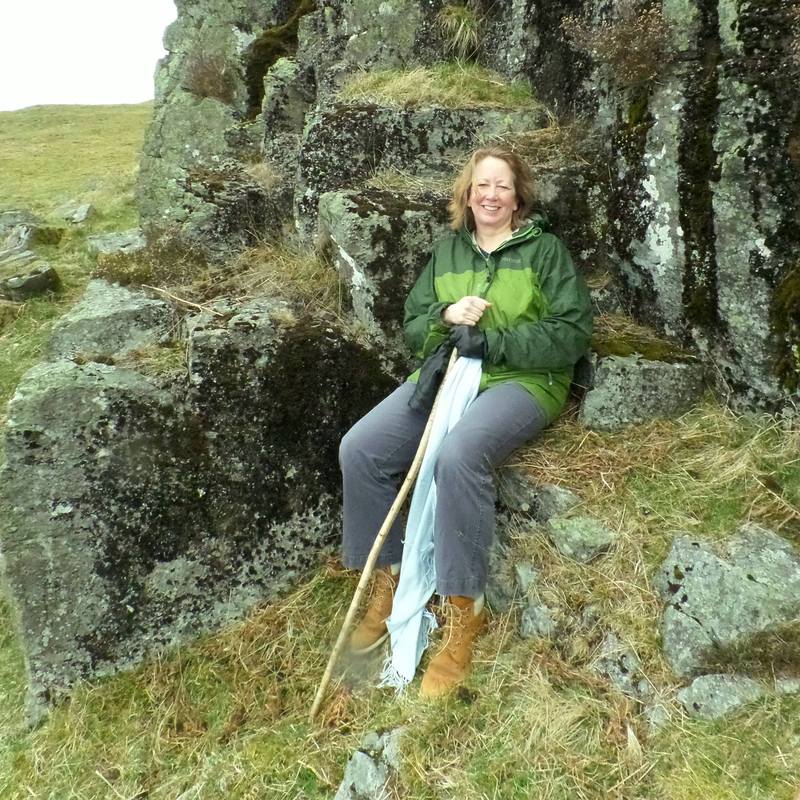 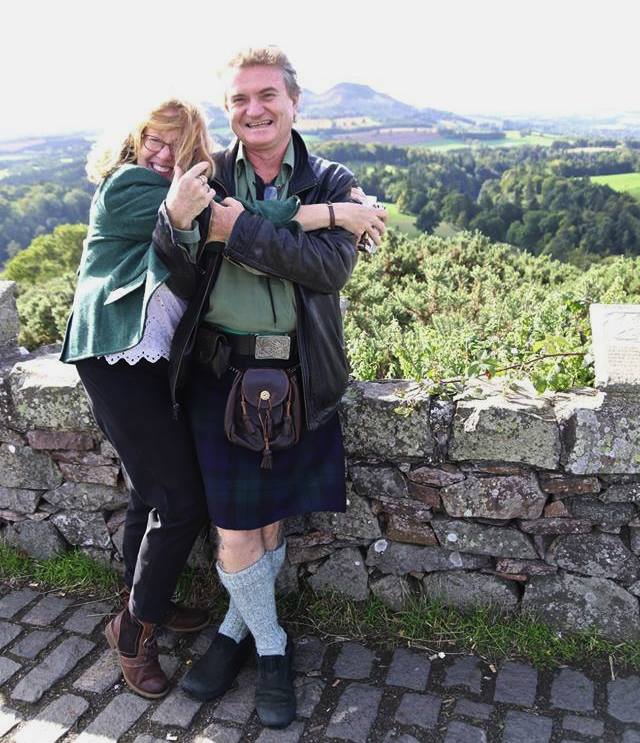 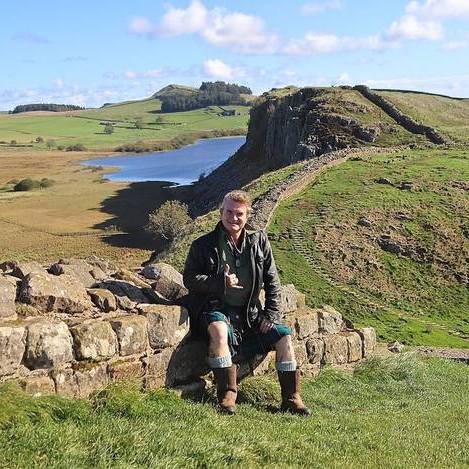 The tour in videos

The itinerary and accommodation changes each year, but these short films will give a good idea of the typical "Borders Raid"

A short clip of Roman ruins from 2017, including guest comments.

A Video Diary entry from three guests for the folks back home, 2016:

As with all our tours, they are active. We spend most of the day on our feet (rather than in a vehicle) with the activity level ranging from strolling through towns to hiking at a good pace along Hadrian's Wall. Guests are expected to carry their own luggage between vehicle and accommodation. In some remote places, the next toilet break might be two hours away, with only Nature's Bathroom as your fallback. When you apply for a place on the tour, you will be asked for some health and medical details. This is used by the guides to assess whether you will be comfortable on the tour. A good yardstick is the time of your one minute mile walk on the flat: test yourself. If you can walk a mile in 17-20 minutes, you will find the tour about right.